British literature has always been a popular area of study in UK universities, but new research has revealed for the first time how and where contemporary British literature is being taught in Higher Education institutions around the world.

Last year international HE educators were invited to take part in a survey as part of the research project, Write Now: Exploring the Teaching of Contemporary British Literature in Global Higher Education – coordinated by Northumbria University’s Professor Katy Shaw and supported by the British Council and the British Association of Contemporary Literary Studies (BACLS).

The results have now been published and reveal an even greater global spread of contemporary British literature higher education programmes than previously thought. The research shows that universities across Africa, America, Asia, Europe, and Australia currently teach 21st-century British literature at undergraduate or postgraduate level with particularly strong representation in South America and countries such as Cuba.

However, while the increase in demand is encouraging, the research also highlighted a lack of resources and support for educators teaching contemporary British literature overseas. The research makes a series of recommendations for investment in trusted online resources, such as the British Council Literature website, as well as opportunities for increased collaboration between academics, learned societies and UK government to enable continuing professional development, greater networking and sharing of resources internationally.

The report also calls for publishers to do more to commission accessible, affordable, shorter-form academic criticism on contemporary authors and key works in 21st-century British literature, written with a global audience in mind; and for publishers to work with the emerging markets and audiences identified by this research to promote sales and representation.

Following the Covid-19 pandemic, contemporary British literature will play a vital role in demonstrating the ‘soft power’ that will define how the UK is viewed by the rest of the world – something which could be of particular importance when it comes to attracting international students to study at UK universities. It will also give British universities and academics a better understanding of the support required by international students when studying in the UK. 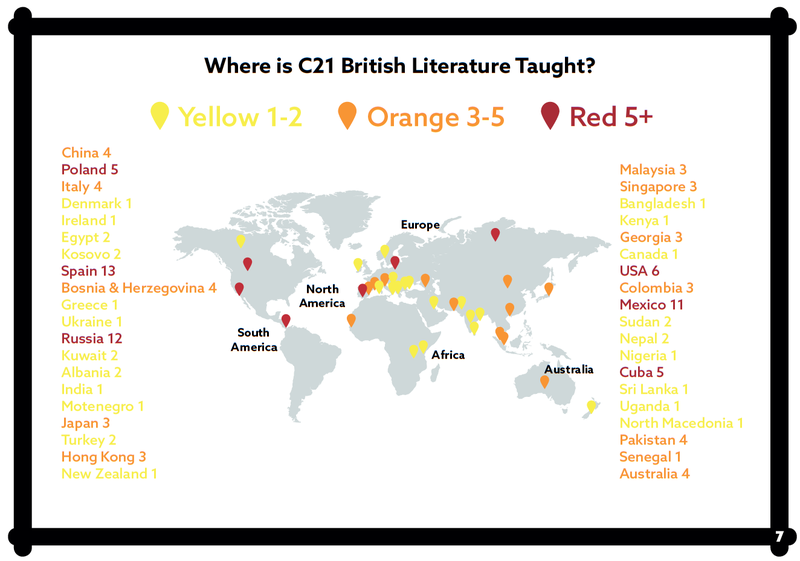 Report author Professor Katy Shaw said: “the findings of the research will be of key interest to UK HEIs seeking to better support and understand international students’ needs. It makes a clear case for increased collaboration and networking between academic, publishing and UK government in joining up networks and enabling the sharing of knowledge across international borders. There has never been a more vital time to study Literature, and the rising popularity of 21st-century British writings in the global classroom offers an enormous opportunity to share new stories about Britain today.”

Sinead Russell, Director Literature, British Council, said: “We’re delighted to support this research, which deepens our understanding of the teaching of contemporary British literature in international higher education settings. We hope that the findings will signpost new opportunities for the sector to work with the breadth and depth of contemporary British literature and collaborate internationally.”

“This report is incredibly timely and exciting. Its results reveal that British Literature is taught, read, and understood outside of the UK in ways that are likely to surprise many. One conclusion that we need to action is how British literature makes a vital contribution to global perceptions of Britain, Britishness, and British culture. Shaped by extensive engagement with leaders of international English Literature HE programmes, ‘Write Now’ offers insights about how academic teachers and researchers, policy makers, and cultural organizations can harness new opportunities that will benefit students, researchers, and the creative industries. These kinds of insights are exactly what learned societies like the British Association for Contemporary Literary Studies (BACLS) need now. We’re looking forward to addressing the recommendations made by the research to identify how we can enhance our connections with, and develop our support for, colleagues and partners internationally.”

“This ground-breaking report highlights the significant value of literature to international recognition of the diversity of cultural experience in Britain today. It helps us all understand the contribution of contemporary writing to the global influence of UK soft power. The research findings are valuable for academics, publishers and policy-makers in understanding the strengthening global market for postgraduate education and the global audience for British writing today.”

“This report demonstrates that the study of contemporary British literature is crucial to for the rest of the world to understand the complexities, strengths, and vitality of modern Britain. The study of literature builds bridges which enhance global understanding, where often borders are contested and carefully guarded. In a post-Brexit Britain and in a world newly dependent on virtual communications, sharing in the reading, studying, and teaching of contemporary literature can help in our post-covid recovery and negotiation of new global relations. We strongly support Professor Shaw's calls for a shared approach to strengthening teaching of contemporary literature globally. Such cooperation will also contribute to enriching the study of literature of all periods.”

“It is encouraging to learn from this report that the number of higher education institutions around the world teaching British literature is growing, and that reading lists increasingly include 21st-century authors, reflecting in part a new interest in Britain’s multicultural literary scene. Cultural organisations, publishers and government agencies should answer this call for additional teaching materials, international networks and professional development opportunities in contemporary writing to support and strengthen this welcome trend in the global teaching of English”

“This study offers a fascinating and revealing insight into the provision for and delivery of the teaching of 21stcentury British writing globally, clearly demonstrating a significant appetite on the part of students across the world to read and learn beyond the established canon. The fact that this survey generated responses from 5 continents and 40 countries speaks eloquently to the continued relevance of contemporary British writing to the global classroom. For publishers, this report underlines the importance of innovation, whether in the provision of digital resources, or more radically rethinking what a research output looks like in the 21st century. As the study states, its findings are best addressed through a collaborative, cross-sector response from key stakeholders such as publishers, academics, funding bodies and higher education institutions to ensure that the field remains as vibrant, globally relevant and popular as it is today. Bloomsbury look forward to exploring how our publishing for students and scholars can play its part in this. The report will certainly be useful for informing future business planning.”

“This fascinating, informative and useful report will be of real benefit to the academic publishing industry. It identifies for the first time an area of global interest that has a lack of teaching resources, and this is something we and other publishers can certainly now act on. We agree that the findings of this research need actioning and that action has to be cross-sector. As a result of this new knowledge, we would be interested in exploring the possibility of partnering with BACLS or even the British Council to develop new resources, or a book series to address the research findings.”

ABOUT THE BRITISH COUNCIL

The British Council is the UK’s international organisation for cultural relations and educational opportunities. We build connections, understanding and trust between people in the UK and other countries through arts and culture, education and the English language. Last year we reached over 80 million people directly and 791 million people overall including online, broadcasts and publications. Founded in 1934, we are a UK charity governed by Royal Charter and a UK public body. We receive a 15 per cent core funding grant from the UK government. www.britishcouncil.org