1.1. The aim of the British Association for Contemporary Literary Studies shall be:

1.1.1. To bring together scholars and practitioners in contemporary literary studies from across the UK and beyond in order to explore the current moment and its contexts;

1.1.3. To support both practice and pedagogy in contemporary literary studies.

1.1.3.1. We understand contemporary literary studies in its broadest sense to include written, visual, performative and audible texts, in English and in other languages.

1.1.4. The Association will encourage local activity by its members which is consistent with the aims and objectives of the Association.

1.1.5. In furtherance of the aims above, the Association may:

1.1.5.1. Collect and disseminate information on all matters pertaining to the field;

1.1.5.2. Cause to be written and printed or otherwise reproduce and circulate such papers, books or documents, digitally or otherwise that further the aims of the Association;

1.1.5.3. Raise and seek funds and invite and receive contributions from any person or persons, or legally-constituted institutions, whatsoever by way of subscriptions or otherwise, provided that the Association shall not undertake permanent trading activity in raising funds for said aims.

1.1.6. The Association may seek to make links with such academic bodies, scholarly intuitions and societies or other bodies that further the aims of the Association.

1.1.7. The Association may do such other lawful things as are necessary in pursuance of said aims.

1.2. Membership of the Association shall be open to anyone with a bona fide interest in Contemporary Literary Studies.

1.3. The Association is non-political.

2.1. Membership shall be open to all persons, of any nationality, interested in the aims of the Association.

2.2. Members shall pay the annual dues at the rate recommended by the executive committee and ratified by the Membership. Dues to be paid on the 1st January and are to be paid annually and cover only that calendar year.

2.3. Full-time students, those in part-time employment, unemployed and retired shall pay annual dues at a concessionary rate recommended by the Executive Committee and ratified by the Membership.

2.4. Membership lapses if the annual dues are not paid within four months of the membership renewal date.

2.5. There shall be Honorary Members, normally expected to be those held in esteem in the field, nominated by the membership, recommended by the executive committee and ratified by the Membership. Honorary Members pay no dues and have no vote.

2.6. No person under the age of 18 years shall be entitled to serve as an Officer or Member of Council, or to vote in election.

2.7. The Membership Secretary shall present an updated Register of Membership to the Council for ratification every meeting. This Register will constitute the official List of Members

3.1. The Association shall have a Committee of 20 members, including the Officers specified in 3.2, and nine General Members elected from among the Members of the Association.

3.2. The Officers of the Association shall be: a Chair; a Vice-Chair; a Secretary; a Treasurer; a Communications and Web Administrator; a Publicity Officer; the Conference Organiser(s); three Graduate Student Representatives, who must be full- or part-time graduate students at a UK university, and must be graduate students or no more than one year after the recommendation of award of PhD. BACLS Conference Organisers will be made Standing Members of the Executive Committee for the duration of their term of organisation.

3.3. The responsibilities of Officers and Members of the Executive Committee are set out in the appendix.

3.4. The Committee is responsible for ratifying the policy of the Association.

3.5. The quorum for Committee Meetings shall be two thirds of the Committee.

3.6. The Chair shall be elected in the year before they become Chair.

3.7. The officers shall be elected by the Annual General Meeting for a three year term of office, staggered to ensure that the terms of office do not conclude at the same time, except as noted 3.7.1 and 3.7.2 below.

3.9. The election to the Executive will take place at the Annual General Meeting.

3.9.1. At the inauguration of the Association, the election to the Committee may take place electronically and not at the AGM.

3.10. Council Members will be elected by ‘first past the post’ system.

3.11. In the event of lack of nomination for any position, the Chair is empowered to consult the Committee and nominate a willing incumbent or seek another willing to stand. The result of an uncontested election shall be declared at the same time as that of a contested election.

3.12. The Chair shall call a Committee Meeting at the request of five members, and shall convene one meeting a year in addition the AGM.

3.13. The Committee may appoint up to three additional Ordinary Members, above the 20 in 3.1, as it sees fit.

3.14. The Committee may from time to time set up and dissolve such Sub-Committees as it sees fit.

3.15. There shall be at least five men and five women on the Committee.

3.16. Should any elected officer resign or cease to fulfil their duties efficiently, the Committee is empowered to request their resignation from the Committee and co-opt a replacement until the next AGM, at which time the post will be open to election.

3.17. The Committee is responsible for supervising Association elections.

3.17.1. Elections for Officers and Members of Council shall be held every year at the AGM as posts fall vacant. Electronic elections may take place in the years that the BACLS-WHN conference is not scheduled.

3.17.2. The Secretary shall receive nominations for the posts at least 24 hours before the AGM.

3.17.4. Only a member whose name appears on a Membership List ratified by the Council three months prior to an election shall be entitled to stand for election or to vote in an election.

4.1. The Association will hold an Annual General Meeting. Other General Meetings may be called at other times, at least once a year, with not less than one month’s written notice to all members, by the Executive Committee or by the Chair at the request of not less than 20% of the members.

4.2. An Agenda will be circulated to all Members at least four weeks before a General Meeting.

5. Amendment of the Constitution

5.1. The General Meeting of the Association may amend the Constitution by a majority of two thirds of the members present and voting, provided that a quorum of twenty members be present, and that written notice of the amendment proposed has been given to all members not less than two months before the General Meeting.

6.1. The Association may be dissolved by the agreement of not less than three quarters of those members present at a General Meeting specially summoned for this purpose, as provided in Clause 4 above. Any funds existing at the time of dissolution shall not become the property of any member or members but shall be devoted to furthering the aim defined in Clause 1.

The officers of the Executive Committee and their functions are:

The Membership Secretary will:

The Communications & Web Administrator will:

The other officers (a Communications and Web Administrator, the Conference Organiser, a Publicity Officer) and Members of the Committee will have such duties as the Committee shall, from time to time see fit to delegate to them, in line with the aims and good running of the Association.

[i] Table of years to be served: 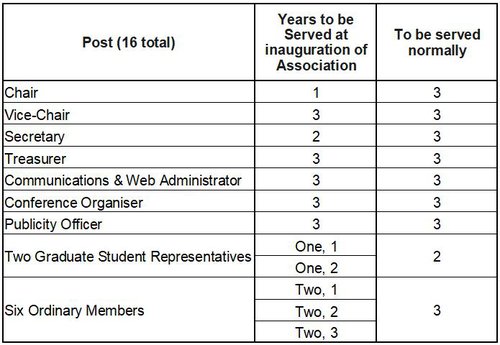